To be clear, what I am about to tell you will not alter the direction of this site. You’ll understand, just keep reading…

When Mopsy first disappeared near the beginning of October, I went to our local shelter every four days for over a month looking for her. Even if she was not mine legally, she was our family and I believe that you should leave no man behind. Also, I had no way of knowing if her owners would come for her, so I wanted to make sure I showed up for her. Because we all want to believe someone will show up for us, right?

Our local shelter has a quasi game show design. Multiple doors, different prizes. Ok, not exactly prizes. There are two entrances, one quite obvious and one around the back. Door #1 is where we all go in to adopt animals. It’s shiny and happy there. Door #2 is where animals that are surrendered by both owners and animal control go. I was informed that I should visit Door #2 every four days and then check behind Door #1 because Mopsy had a chip and that could change how she was processed back into the shelter.

Let me tell you about that little back area behind Door #2 because I am betting there are thousands like it in America, and who knows how many on a global scale. (This isn’t the FUN part btw…) It’s a few smallish rooms, stacked up with kennels, filled with felines. Every visit at least one little kitten reached out their tiny paw to me as I walked by looking for Mopsy. All the rooms had the atmospheric pressure of fear. I left each time thinking about what we have done to them. We, as in humans, and what WE are doing to these animals. Abandoning them, starving them, abusing them. Allowing them to excesssively reproduce so shelters have no choice but euthanizing them in mass. Being aware of the problem is really never the same as coming face to face with it, is it?

I’m not sure if it was despair that led me down this road or that my year with Mopsy somehow legitimately changed my feelings about cats. I’m leaning into the latter option there pretty heavy. Honestly, I never really liked a cat until I met Mopsy. Certainly never attached to one. I thought the species, in the kindest terms, were not exactly personable. Less kindly, they seemed snobbish and could not give a f*ck less about humans. Hindsight, I may have been somewhat wrong. So every four days, I also ventured thru Door #1 and looked through all those kennels as well. And one day, I met her.

Cue the music, NO, REALLY CUE THIS ONE UP, you’ll understand why in a hot second: 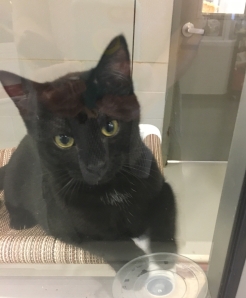 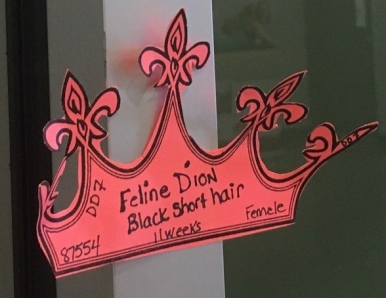 To be clear, I did not know her name until I visited with her one day. There was another black cat in her cell as well. She was abit shy but purred like she had a HEMI under her hood. (Strangely, of all of Mopsy’s wonderous traits, purring was not one of them.) She’s got two little sparsely white patchy areas that keep her from being a totally black cat. And I was drawn to her amoungst all the cats there. I’m not sure why we gravitate the way we each do in life, but here we are…We kept her name, but I changed the spelling to Faline. And with that song and this name, it felt right.

Oh, and there’s another piece to this story because it takes more then one pussy cat to form a posse…

This is Charlie. He was in Faline’s cell and had just had one of his front legs amputated. Ok, it had actually been 20 days since his amputation, but we were oddly enamored with him as well. And for some reason, both came home. Faline seemed shy, Charlie didn’t and they would have each, or that’s the logic train I had going thru my mind. And the ladies (dogs) have each other, so it seemed fitting in a very Noah’s ark symmetry kind of way…

I named him after my Grandfather who was Charles and who, for my entire life, had MS (multiple sclerosis). He’s one of my biggest heroes. I learned from him that a disability is just a difference and rarely does it have to be a limitation or an impediment to living a full life. Charlie does not seem limited at all, in fact, he actually cleared the baby gate faster than Mopsy and moves at the speed of cheetah.

If naming a kitten Faline Dion didn’t make you smile or a three legged wonder, then I’m not sure what to say, maybe you should check for a pulse. Like your own wrist.

I think for me the biggest thing is, I hear people who have lost pets say quite often that they cannot bear to get another one. They can’t bear to say goodbye again or the pain of losing another one. I’ve visited that neighborhood of thought and almost took up residence twice now, but I kept coming back to the same thought, why not? The minute you allow them in, you know you will outlive them, but isn’t it better to have lived with them then to have never known the joy each one brings? Because if life is a journey and we are all Travellers, cats and dogs too, isn’t it in the end about the company you kept while humming along?

BONUS. I’m feeling the Oprah. Did you just roll your eyes?

I told you at the start of this blog that I am a dog person and Mopsy is an anomaly. We humans like to label people and ourselves, don’t we? Why do we do that? Is that a comfort thing? Is it default recognition software in our brains? It got me thinking about expansion. Granted adopting two kittens is minor when compared to say, moving to a different country, but it isn’t. If you’ve spent most of your life believing one thing only to find out, hey, maybe it IS the cat’s meow. I’m trying this on: Allow yourself to exceed your established identity boundaries. Allow yourself to be wrong. Wrong about anything. Abandon your label. Abandon labeling others as well. And as a person who can be fearful of the unknown at times, I find when I make changes beyond my orderly scheduled world it makes a distinct sort of happiness in my soul. Like a really good happiness. And even when the changes create hard work or some kind of inconvenience, there is still that crazy good happiness inside.

Consider this: As we are upon a new year, try on the idea of expansion. When you encounter the unknown, be brave and boldly go where you have not adventured before. Let go of what you believe things/people/places concretely are and open yourself to all the things that may otherwise be. I’m not saying let go of everything, just allow yourself to grow. Expand. See where it takes you…

Speaking of expansion, Mr. Grinch, it’s almost Christmas and I would be negligent not to suggest some cinematic joy…The first is short but easily my favorite. Whatever drugs Theodore Geisel smoked to come up with this yarn, and all of his other stories, my childhood and adult life is all the better for it. In fact, I would say the world is better for having known Dr. Suess. And little Cindy Lou Who, who was no more than two and the Grinch who’s heart expands three sizes when he realizes, he was wrong. (See EXPANSION!) And his poor dog with that antler, I was so concerned as a child that it was hurting his head, but mostly, it’s all the little Who’s down in Whoville singing their little Who hearts out…Welcome Christmas indeed!!