It’s been a hella long time, hasn’t it?

I rather boldly declared my modus operandi last post and then, POOF!

Where’d I go? Down the rabbit hole?

Truthfully, I spent some time and not wisely per say, more like the way we spend pocket change. Necessary, trickling, but nothing substantial to show for it. You know what I’m talking about…

BUT then, last month, I went on a journey, which is where I decided to begin, Again…Cue the traveling music…

By journey, I mean road trip. ALL BY MYSELF. Let me say that again, it was just me. Several people who I explained that to seemed deeply perplexed by that decision.

Round trip mileage was 1,857 miles.  That’s a ways right? I say all this because I’m not a road trip aficionado. I’m a TOTAL amateur. As in-really, this was my first trip as an adult for any amount of distance in a car. Long distance by plane, YES very much thank you. Cars, NO, nada, not so much.

How can that be you say? America is the country built for road tripping, is it not?

How’s that for honesty?

I have been holding on with a white knuckled grip for as long as I can remember to the belief that traveling distance in cars made me sick in the tummy. Nauseous and just ugh. In fact, I have occasionally felt ill traveling only an hour in a car.

Let me word paint a litttle exposition. My adult home is the polar opposite of my childhood upbringing. It is disciplined, stable and constant. NO, not boring, just… Leaving home by vehicle means embracing every possible precarious situation that may arise such as, Where will I find the next potty? I think if you are raised in a very unstable environment, you tend to seek the polar opposite as an adult and then hang on for dear life when you find it. Not endorsing that choice, just saying that is where I was at prior to climbing behind the wheel.

Take a moment here: Have you ever thought about your fear(s)? I mean deep down-in-the-well spelunking. We all have fears. Where did they come from? As in the roots. How many of your fears are authentically your own? Are they based on stories and conjecture from family, friends, the media etc. OR your own experiences that somehow turned gnarly and thorned in your recollection? How are they affecting your life, OR are you reorientated away from their general direction and pretending to be fearless?

A big part of the reason I took this jaunt was to see my Dad, because it had been 11 years. And I will delve into that more in the next four posts, but full disclosure,  during my visit we had a conversation where he vocalized the very thing that I had begun to consider not long before I decided to plot out this drive. The possible reason for my fear of travel by car. He said: maybe my fear of travel had to do with the fact that I went on a trip as child and never got to go home again. Yep.  I went to visit my Grandparents in Kansas and while my Mom and I were there, he called on the phone and asked for a divorce.

I always remembered my room had just been painted candy pink and I never got to play in it. And I would never see my little tree outside get bigger or my friends.  I can feel it now, just as I did at 8 years old. And my Dad was right, that is where my fear took root. Right there.

Truthfully, his verbal validation of my thoughts has made a huge difference. Just acknowledging it greatly altered my internal barometer. Strange magic, huh?

Before I  left on this little journey, I had read a travel blogger’s site who wrote something that I’ve been carrying inside ever since. He said, “Travel is the tool we use to become better humans.” That’s the bread and butter right there. By my estimate, all roads traveled seem to lead inward. And intentionally physically moving your body across this world can change you metaphysically. If you let it…I’m serious.

I think travel also mimics life, in terms of it’s all a journey. I’m not sure there are any true destinations, because way leads into way. Love, Death, Birth, Pain, Happiness, Sorrow…all journeys, not destinations. And we need to get comfortable with that fact.

Let me add, this drive has allayed most of the above fears. It opened up something inside me in the most wonderful way. And I’m still wide open after weeks since returning home.  I left as a scared girl and journeyed towards a braver woman. I am now yearning to travel via automobile everywhere, to see what can be explored and what there is to learn about myself.

P.S. I thought of Mopsy almost everyday and how brave she was..and how I felt she was with me, rooting me on to be brave.

Do you want to see some pictures from the first leg of my tour?

Yes, I took this while driving. I’m not sure what crop this is, but at 78 mph, it made me think of Lavender. (Western Kansas) 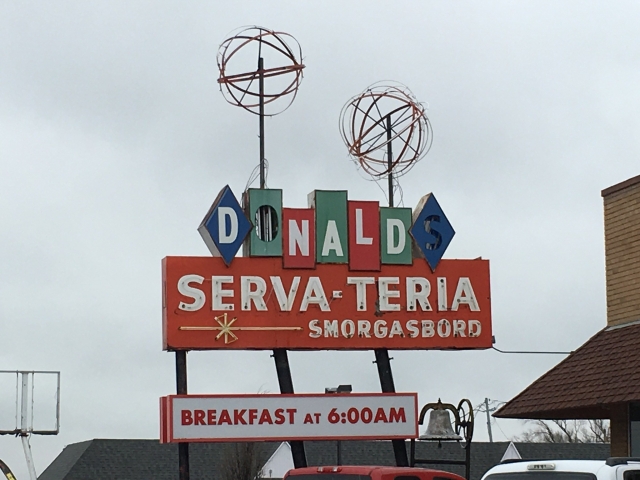 I didn’t eat here, but did turn around to photograph the sign. Is that not the most awesome named establishment EVER? 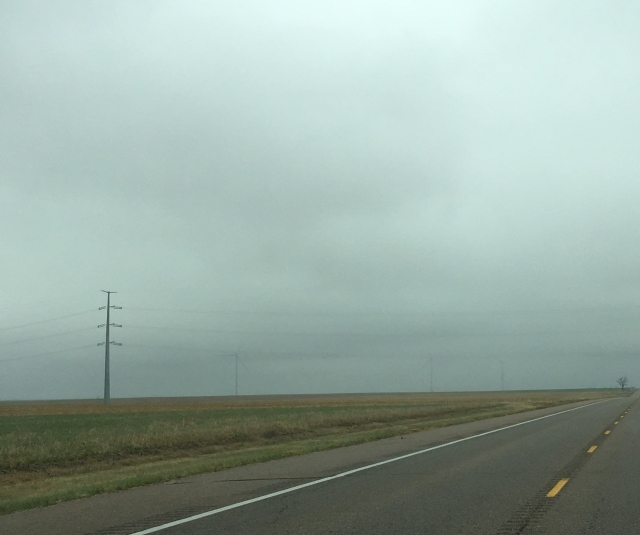 Most of the drive was rainy. You can just barely see the giant white turbines in the haze. It reminded me of a science fiction movie the way the propellers would dip down from the low cloud bank. Like giant alien arms. Yes, I was again driving while taking this image.

77mph. Isn’t this a great photo at that speed? Over the shoulder no less…I love all the windmills and the interesting alignment of the large wooden power line structures out in the middle of nothing. (Don’t have a photo for that) Those looked like ship masts out in an ocean of crops.

In New Mexico now, the clouds begin to break. And the desert appears.

Lastly, this one has a story. I am on a two lane highway and as I am driving I see what looked like a large beige mass. I think I actually said out loud, What the hell is that? And as I drive by, there was this beige bull languishing in the sun. He reminded me of all my fur kids at home who bathe in the sunlight at every chance. On his back and so content. I was on vacation and so I turned my car around because I was going to regret not photographing that moment. As I passed by on the opposite side, he was still on his back and then once reoriented in the correct direction, this is what I got…

See him? Enlarge it. He’s standing not basking!!!!..I actually got out of my car, on the side of the road and took this..and as I said Hello to him, yes, out loud, he just looked at me like, Girl, What the f*ck are you doing? I even thought he might charge me for a second and he seemed so much closer than this image shows.

P.S. YES, there is a movie for this…Elizabethtown by Cameron Crowe. It’s really one of THE road trip movies. Great music and really, I don’t know anyone who has watched it and NOT wanted to take the trip Claire lays out for Drew…the riff about Jeff Buckley gets me every time.

May the road rise up to meet you Travellers…