Part 3, Pussy on the Road (if you are new here, this is a honorary one reference to Mopsy not my lady parts…just FYI…when confused, try going back to the start…)

I left Tucumcari on Sunday morning to drive to my Dad’s in Rio Rancho, which is on the fringes of Albuquerque, New Mexico. Let me say how internally discombobulated a person feels when they are driving to see their Dad who they haven’t in 11 years. Having a less than fully functional relationship with any parent leaves a distinct kind of crater in our souls. By equal measure, I can’t speculate what it’s like to be the parent in a situation like this.

The biggest reason I took this trip was to get answers to questions.  I’ve struggled throughout my life because of not knowing the answers to said questions. Questions I felt my Dad needed to answer. I’m an oddly direct person who sometimes has a hard time mustering the courage to ask the important questions. Whatever answers would come…I was, in theory, prepared to conduct my version of the Spanish Inquisition…

Of course, here’s the music…

Let me preface with this, I don’t believe you can blame your parents for how your life turned out. I mean you can, but I think that’s a dead end. I believe the life you have is the one you choose. That is once you are of age and aware. And we each re-choose our lives daily. I realize that is a bit rough, the heaviness of free will, but it’s the true true. Our inner evolution is our choice. I also believe that you watch your parents in youth and like little sponges, we soak it all up. We become a sort of imitation of them until we choose to undo what we learned. Maybe release what we learned? I believe all parents actions have more gravity than any words they can say to us. I believe the responsibility you have as a parent can not be overstated. We are all a product of our upbringing for better or for worse.

Allow me to interrupt with a few roadside oddities…because they are the glory of road travel, are they not? And it seems whenever I’m in deep thought driving, some random thing would distract me…

First, the democratic rest area…I’ve never seen a pottty where it’s asking for your approval, have you?

Then there was this…

Look closely. There were like 50+ signs on the side of the road for what was essentially a tourist trap potty. As far as the eye could see, BIG signs. Seriously, I have never seen anything so fantastically obnoxious…it was like Las Vegas as interpretated by road sign display…minus all the lights of course…maybe there are lights on the signs at night?! One can only dream…

What I found when I was with my Dad was that he was abit sad it seemed. Maybe abit sullen. I believe he is as wounded as I am by the events of the past. But differently because he’s the parent and I’m his daughter. There were things in his house that were mine. My dressser from childhood, a Christmas ornament I’m pretty sure I gave him, photo albums, a copy of my Guild piano certificate he showed me. It was like a memory of me was living there all along.

He told me stories about my family and his military experiences and the only question I mustered in my few days with him was, “Why didn’t you come back?” As in for me, why didn’t you come back for me? Here’s the thing, he did. MIND BLOWN. He came back four times he said. That’s a lot of mileage. My mom prevented him from seeing me. As a peripheral witness, you don’t have all the info on her here, but you’ll have to trust me when I say I know he’s telling the truth.

So, here we are, two people robbed of decades of knowing each other. That’s really what hit me hard at that time, how do you process that, one parent robbed you of knowing the other parent, and I know I’m not alone in that experience. My mom raised me to believe I was abandoned, told everyone she never understood why he didn’t make more of an effort to see me. All this did was reinforce all my bad feelings about myself and the situation.

I know you’re thinking, why didn’t someone reach out sooner, why did you let this time go by? Why didn’t he keep trying? Why did I not try? Because I come from families who avoid real communication. We evade discussing the difficult things, the emotional things, the unpleasant things, the direct and honest things. At least all the generations I have known, on both sides, total avoidance.

More than that, it seems self epiphanies in each of our lives cannot be accelerated. They are running on their own clock. We can’t force their arrival any faster or change ourselves faster. They occur in their due time, as they are meant to, when they are meant to. I’m not callling fate here. I’m saying, CHOICES people, the choices we make lead us down the path. It seems at times we are not ready to embrace the choices that we need to make in order to heal and grow. It’s like we’re not the right version of ourselves yet. This is one of those mysteries in life that always leads me to believe there is more going on down here than meets the eye. I’m not sure I could have chosen to take this trip prior to actually taking this trip, if that makes any kind of sense. I was never the right version of myself until I was. The hands on the watch said it’s time.

The full truth is that I had blamed my Dad for the series of unfortunate events of my youth. Because he left me with my mom, and she dragged me thru multiple divorces from very questionable men. One of them was a child molester. I wanted to tell my Dad in person what that man did. I wanted to let him know how I’ve been angry, abandoned and hurt, but as I stood in their kitchen, I found I just wanted to forgive him. How can I hold him responsible for what he didn’t know, right? I just always felt like he ran off and left me behind. You saved yourself, but left me. Was I not worth saving? That is the hard ugly question. Because parents are responsible for their child’s well being, aren’t they?

Forgivenesss. Now there’s a riddle. How do we really forgive people? Do we, humans, REALLY forgive people? WHAT IS FORGIVENESS? That whole “forgive us our trespasses, as we forgive those who trespass against us”. I hear the words, but am still wrapping my head around what it means. What does it mean to really forgive…Because I want to forgive my Dad. As I listened to him talk every day, I just thought I want to forgive you. I actually could feel something shift inside after seeing him. Then there’s the sadness. That’s a hard deal, sadness for all the time that feels taken. And it was taken…but the big thing is  I want my Dad to meet me 50/50 here. Maybe he needs to forgive me, I have to consider that possibility as well. I made the drive to open the door.

At the end of the day, I think our ability to forgive others is directly proportionate to our ability to forgive ourselves. And the past it so far behind us, which is where we all need to put it…which brings us back to what I first said, about choosing our lives. This journey is the jump off point for me choosing a better life for myself. Knowing full well, that it will take it’s own sweet time.

More pictures? Why not, you say…

When I lived in Rio Rancho as a child, with my still married parents, I took a variety of dance classes. The road that took us there passed by Maxie Anderson’s, the world famous balloonist, estate. He had a small heard of buffalo. I’ve always loved buffalo, probably because of these fellas. Maxie Anderson had met with an unfortunate demise since I was last here, and I asked my Dad where the buffalo went. They were adopted out into a happy home, or rather their descendents were… 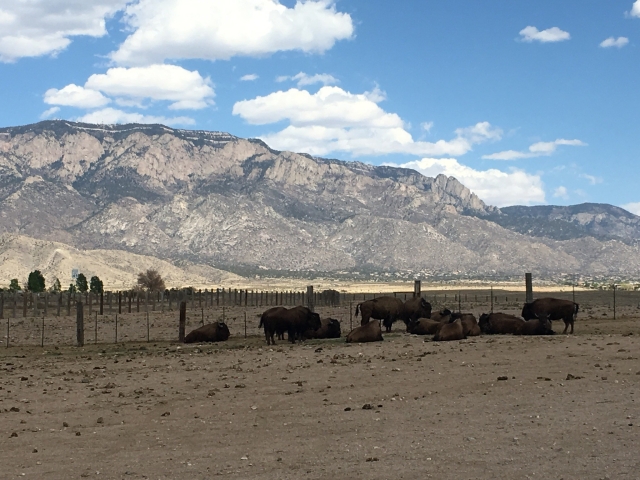 Seeing them made my heart so happy…The mountain range in the backgrounds are the Sandia mountains. Sandia means watermelon in Spanish, which is the color the range turns as the sun sets in the evening. And I’ve remembered them all my life, the buffalo and the mountains. 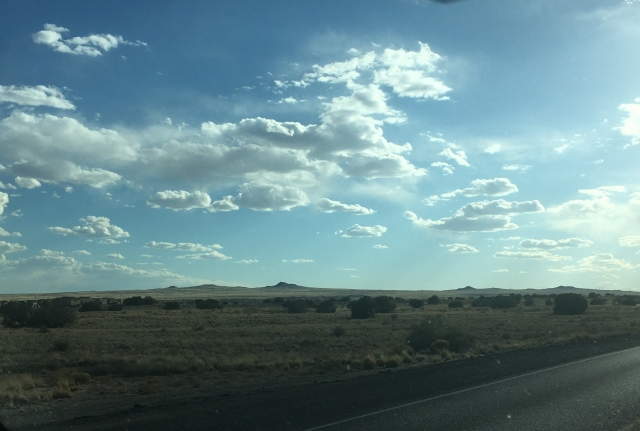 The funky dimpled craters on the horizon. They are of course dormant. Active volcanos would have been more exciting though, right? I was always fascinated by them as a kid. There were a lot of fossils around where we lived as well. The two together always conjured some prehistoric land before time ideas in my young mind.

And yes, I have a movie for this… Life as a House. Kevin Kline and a most promising pre-Star Wars, Hayden Christensen. It’s about the rebuilding of a parent/child relationship under some dire circumstances. There are not many actors that you can say never had a bad role, but Kevin Kline is one of them. I warn you, you will cry big Dumbo tears on this one..but life is just like that sometimes, isn’t it?