Sincerest apologies for my delay, sinuses & snot again, I tell you what…

Let’s talk about a kind of road less traveled scenario. Unlike Frost’s  version, this is not the lesser travelled, but the more aggressive to travel.  Ok, THIS PHOTO is actually the walking trail that comes after the crazy drive, but I sh*t you not, the actual road is not much different. It’s a little wider and a smidge flatter. There were a fewer huge rocks, but still, completely ludicrous.

Let me back up…

Earlier, when I was in the Dunes visitors center, one of the employees and a fellow dune climber both told me to hang a left on my drive out, right off the highway that brought me to the dunes, at the sign that said, Point of Interest, Zapata Falls. The employee said, “The road is a little bumpy, but the falls are totally worth it.” He did a weird gesturing shrug combo with his head/neck/shoulders when he said bumpy, probably because we were at his place of work where he couldn’t say, “It’s rocky AS F*CK and you will SERIOUSLY consider turning around a number of times before the three miles drive is up, because any sane person would, BUT KEEP GOING!” Ok, he did seem abit more demure than the f word, but really, it works.

Oh, and there is an about 2 mile hike after the drive to reach our destination. I mean hike on what you see in the picture above.

I’m not sure how long 3 miles should take on a road like this, but it seemed like forever. Because I love my car and I drove slowly to try and not puncture something.  Bumpy does not begin to describe this road. Jarring. It was jarring. He should have jarring. Seriously,  I think I was going 10 mph and it could have given me whiplash. Am I exaggerating? Maybe, but not too much. You should go try it out and let me know. It’s surprising.

I wonder how many people have turned around instead of going the distance. The car that was behind me initially stopped appearing in my rear view mirror after 5 minutes.

Sometimes, you gotta do the work/crazy idea to get to the prize people!

At the end of the road, I arrived at the tiny 5 space parking lot and no sooner had I started up the trail did I run into another fellow solo woman traveller, and then another one, who had a dog. SEE, SEE,  I’m not the only woman who travels by herself!

About two thirds of the way there, I met a lovely couple, who, and I am a terrrible judge of age, but I would put them in their early 70s. Both were gray haired and youthfully souled. She had a walking stick and they were decked out like Eddie Bauer mountaineers. She told me very specifically to make sure and go all the way to the back to see the falls. Go all the way back in, she said. Both agreed it was spectacular and well worth the trip. Such friendly people!!

Did I mention there’s a stream? Of course there is…Yea, we find that and then cross/ climb through it…

I’m a pretty good rock hopper, but the further along I went, the more precarious it was to find a path thru the stream. And I was wearing my Birkenstocks, which was not perhaps the best choice in hindsight. It looks so friendly in these pictures, so serene, not at all daunting. Then came the ice sheets…which you can see in the above picture.

When I turned around though, I found this and there were some fairly questionable climbing decisions to reach the end, during which I could not help but wonder how in the hell the nice lady with the walking stick made it?

Do you see that magnificence? That is the falls and it is frozen. There are no words. Just awe. And, NOPE, that is not me, nor one of my dogs. This couple was shooting pictures when I got there and didn’t leave until I left, so this is what I got…the advantage of having someone in the photo is that it gives you a better idea of the size of the falls formation. And again with the awe. Never seen anything like it before.  I’d say it was about 99% frozen. You could hear the 1% non-frozen water falling and let me see if I can give you an idea of that as well. 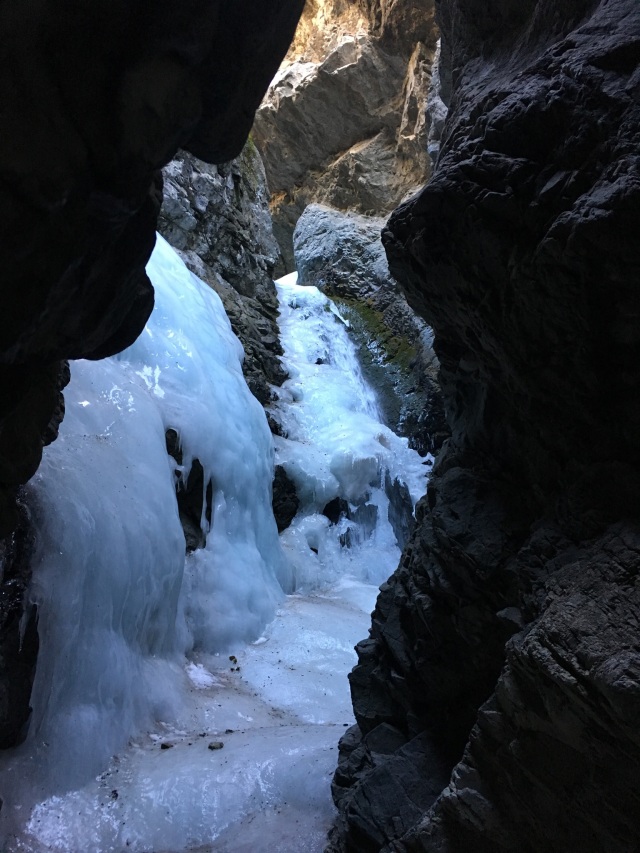 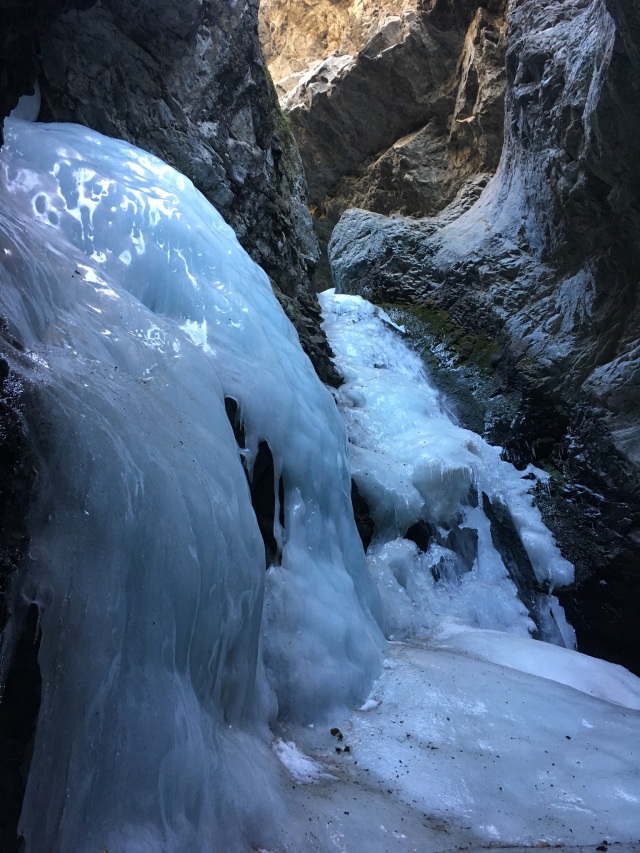 You can kind of see a hint of a water line in greenish hues on the right kinda curving around and down. The water is rushing so fast it looks almost like the ice. The last image is just the rock walls that were covered in a sheering of ice. There is something very soothing in the sound of a waterfall. Even a tiny one.

I can only imagine Mopsy or any of my furry kids here in this place. It would be such a delightful adventure. SO much to smell, to see, to hear and probably lick!

In summation Travellers, climb that mountain, drive down the questionable roads, and pick your footing wisely. Travel really does teach us about who we are and how brave we can be, doesn’t it?

One more picture…I took this after I left the falls and was driving away on that two lane highway…something about this makes me so happy deep deep down inside.

And, yep, that’s the little moon…days just don’t get better than this…

How about a different kind of movie? An off the path kind of choice. The Descent is a girls cave climbing trip gone wrong. Wrong in very bad ways. Very few films do suspense in a new way AND have super creepy creatures, bu this one does. And yes, this film does owe a lot to Alien, but it stands on it own in originality. IF, you don’t like horror movies, because I really only like them few and far between, then how about a book? Wild by Cheryl Strayed is worth your time. Her one woman journey is all walking/hiking. I haven’t seen the movie, but I do recommend the book.