I’m sliding into here with what’s left of this Monday by the skin of my teeth. I wish I had made it here this morning, but alas, it was not meant to be. Or rather I did not make it be.

How’s life been treating you or rather how have you been treating your life? That’s really what it is isn’t it, how do we treat ourselves each day? Stay tuned for that tune tomorrow..tonight we shall build great things with our imagination…because it’s still Imagination Monday for another 4 hours and 20 minutes at the time I type these words…

After being MIA for the past week, it seemed appropriate to appear again today as it’s “R” today, R for Return. Returning to the scene of the crime, returning from a journey, returning your library books, returning affection to another being, returning things to their previous state. Returning home.

Gosh there are so many words that begin with an “R” but before I dive in, I tried to think of what music we need for a night like this, late fall, bordering on winter. It’s dark here at 5pm now. Of course, The Rolling Stones came to mind, if you’d like that kind of thing, GO here. OR I remembered a song that recalls to mind dancing in bars or clubs late at night right before closing. When it’s just the two of you and some person that wants to go home now. Dancing close in that slowly draping cadence. The kind of moment that you’re lucky to experience once, maybe twice in life..and that song, well, the name begins with an “R” and it’s such a great word, Revelry. Oh Caleb Followill, am I right?

Do you know what that word means? Merrymaking. Seriously. This is one of those words that I think sounds like it should mean something else. For some reason the word makes me think of angels. That’s weird right? Or just something bigger than noisy drunken festivities…It’s a Shakespeare word, am I right?

Other good words, Rebel, both noun and verb. I’ve always seemed to be a fan of a good rebellious woman in the movies. Or the ones that go full on Rogue. Ripley in Aliens ala Sigouney Weaver, or Linda Hamilton in T2, Princess Leia, Buffy the Vampire Slayer, the original La Femme Nikita, and Jen Garner on Alias just to name a few…I prefer the ass kicking fare over the romance and roses act every day. Very rarely do I enjoy the ridiculous silliness of Rom Coms.

Resilience is everything isn’t it? We all need to learn to be like a duck and let the shit roll off. The ability to recover and restore, right your ship, isn’t that how we not only survive but learn to thrive. And I think some of it is born in us, but I’m pretty sure the rest of it is acquired on the steep learning curve called this life.

Reality and real are the last two words that come to mind which leads me to always think of THIS. Pretty much says it all. There are very few finer philosophical questions than what is real.

I have no idea what I made this letter into in my youth. Instead I went with something that makes my inner child smile…here comes the scary chalk art… 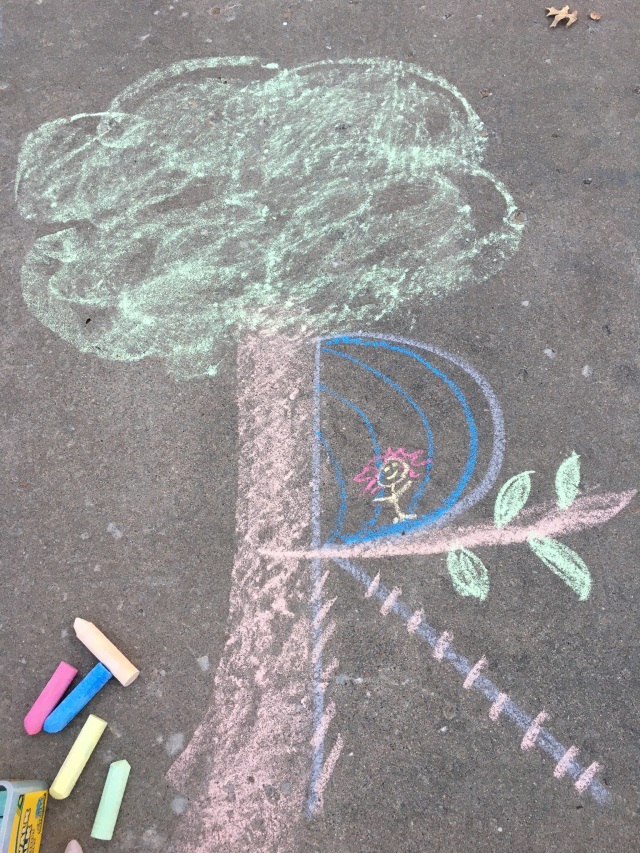 The long spine of the “R” would be a sort of stabilizer that you would plunge into the ground right next to the tree and the leg becomes a ladder to climb up into the branched canopy. You can see little me in the glass piece, with the usual wild hair. The tree house would have a little entry at the top of the ladder, near the trunk of the tree. Unlike wooden tree houses, you could see through the floor and in every direction. It would be AWESOME.

As a kid, I would have said the “glass” was made from a kind of rock candy, because I was fascinated by rock candy and would see no reason why it couldn’t be made clearer and curvy. Also, this would attract the hummingbirds.  A source of sugar that they could lick with their tiny little tongues. That’s what my story would have been, an edible hummingbird observatory. I’d probably name them all and of course, they would speak to me as a child and tell me their tiny hummingbird tales.

Tell me that’s not the most weird and wonderful thing you’ve heard all day? That is why we have to practice using our imaginations!!

The adult in me would do something more practical. I’m a big fan of working out in the current outdoor temperature because I believe humans, being animals, are actually meant to endure and thrive in whatever season is present. Let’s call it building resilience.

My current studio is an attached garage that has no climate control outside of a fan in summer and this very interesting heating device in winter that only radiates heat but does not warm up the entire room. Last week I had a day where I doubt it was above 20 in there and it was awesome. The sensation of warming up and sweating in the cold is unlike anything else. BUT most people would never set foot in that environment so, here’s my idea… 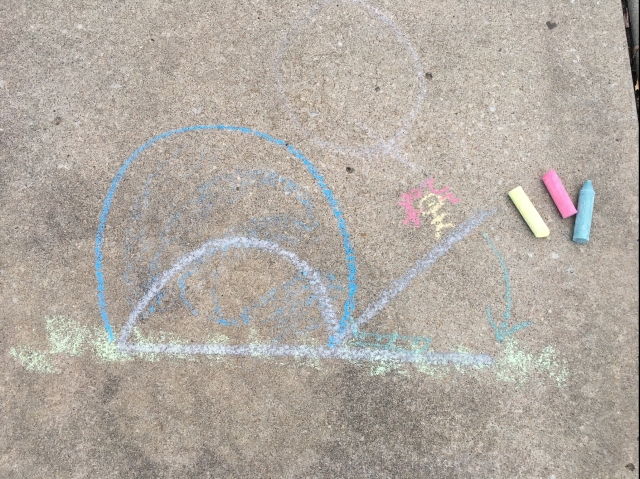 I laid the R on it’s side as you can see, and the spine is now the base of the apparatus. The leg is the pump that you use your weight and possibly some jumping on to inflate the bump of the R into a dome. This would be made of some sort of clear material that breathed and would use sunlight to warm or cool itself. Since I’m imagining this, I’d say it would be intuitive in it’s climate control. BUT you’d be outside which I think is the best element really to work out in. Remember we are animals, and I think just being outdoors can change how we feel in an instant. And it would give me some variety in scenery as you could take this contraption anywhere you wanted. You could use it outside in the rain and the snow. Again, imagination is awesome

What would you do with the letter R? Any other great R words you’d like to add?